“Nobody can guarantee a company or concept eternal life, but no one can accuse me for not having tried to”

Ingvar Kamprad (1926-2018), the founder of IKEA, had a true and burning desire for his lifework and at an early stage wished to secure the independence and longevity of the IKEA Concept, including the IKEA trademarks. To help him achieve this he established Inter IKEA Group and Interogo Foundation in the 1980s.

The Testament of a Furniture Dealer

In 1976, Ingvar Kamprad, wrote The Testament of a Furniture Dealer. A guiding document that describes the basic principles he so passionately believed in, such as: “Let us be self-reliant in the matter of building up financial resources”, “The fear of making mistakes is the root of bureaucracy and the enemy of development,” and “Only while sleeping one makes no mistakes”.

The first page of The Testament of a Furniture Dealer also clearly defines the IKEA business idea: "We shall offer a wide range of well-designed, functional home furnishing products at prices so low that as many people as possible will be able to afford them”, as well as the overall IKEA vision: “To create a better everyday life for the many people".

One of the great entrepreneurs of our time

Ingvar Kamprad - recognised globally as one of the great entrepreneurs of our time - passed away peacefully at his home in Småland, Sweden on 27 January, 2018.
The culture and values of Interogo Foundation are indentical to those of IKEA and reflect the entrepreneurial spirit of the late Ingvar Kamprad. 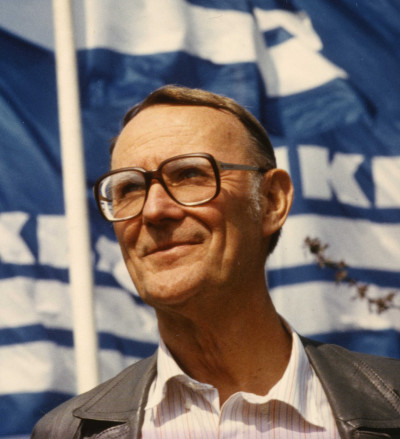 Ingvar Kamprad at IKEA in Älmhult in 1983

We use cookies to make it easier for you to use our website. They allow us to recognize our registered users, count visitor numbers and find out how they navigate the site; helping us make changes so you can find what you’re looking for faster. Find out more